Why Indra Jatra is celebrated?

Therefore, upon my visit, I want to observe it and take some pictures, and mingle with locals to know its history.
Which places are the happening ones in Kathmandu?

I am particularly interested to engage in during the 'Indra Jatra' festive.
I have also overheard that the calendar tp observe the jatra is different every year.
How to obtain the dates and routes?

Staff member
It is believed that many centuries ago, Indra (king of Heaven)’s mother needed specially scented flowers (Parijat).
Indra looked for them but could not find them in heaven. Indra discovered Parijat flowers in the Kathmandu Valley and tried to steal them for his mother. He was caught and imprisoned by people in the Valley. Indra’s mother came searching for him and people were shocked to know what they had done. They released Indra and dedicated one of the most colorful festivals of Nepal to him to calm down his anger.

This festival lasts for eight days with singing, mask dancing and jubilation.

Various masked dances like Pulu Kishi (elephant dance ), Lakhe, Sawa Bhakhu and Mahakali dances are performed at various places. Indra is thanked for the rains and assured once again that he is respected in the Kathmandu Valley.

The festival of Indra Jatra is intimately linked to the harvest season as devotees give thanks to Indra for rains and good crops.
One of Nepal’s most vibrant festivals, processions with masked dancers take place in the capital, Kathmandu.
The celebrations usually last for eight days and the festival is celebrated by both Hindus and Buddhists.
Upvote 0 Downvote

Staff member
I found this interesting Myth about Indrajatra.
It is a joy reading. Its an article from "The Himalayan Times" 2015-10-04, newspaper daily 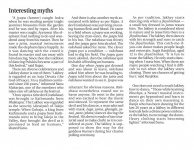